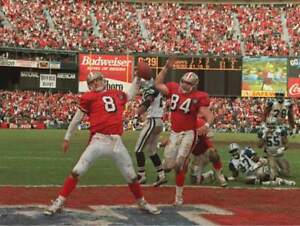 The San Francisco 49ers beat the Dallas Cowboys 38-28 in the NFC Championship Game at Candlestick Park. It was the third straight season that the two teams played with a shot to the Super Bowl on the line. It was at the height of the NFC’s dominance, making the game the de facto Super Bowl. The Niners took command early, scoring three touchdowns in the first eight minutes and never looked back as Steve Young erased the notion that he could not win the big game.