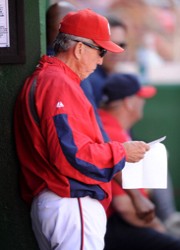 One could see the Nationals on the horizon if they looked at the players they had coming up, but most experts thought they were still a year maybe two years away. Even their management considered them to be a year or two away as Stephen Strasburg was put on a strict innings limit, despite them winning the division and going on to the postseason. Even some viewed Davey Johnson as a seat warmer who would teach the young Nats to play and hand the team off to the Manager who would lead them to the playoffs when they were ready. However, it was a throwback to the 80’s as Johnson who was the wiz kid manager who grew with the Mets kids did it again, this time as the old grizzled master. Not only did the Nationals compete they had the best record in baseball as playoffs return to the Capital for the first time in 79 years. 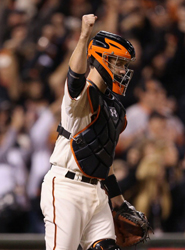 It was as jarring as it was shocking last May when Buster Posey was run over at home plate by Scott Cousins of the Marlins. A year earlier Posey was called up and provided the spark that helped guide the Giants to their first World Championship since moving to San Francisco. Posey lay on the ground, with a knee injury and a broken leg and his 2011 season finished. Coming to Spring Training Buster Posey had to restart his career and go through a tough rehab. Not only did he recover, he excelled guiding the Giants back to the NL Western Division Championship, while becoming the first catcher to win the batting title in the National League since Ernie Lombardi in 1942. 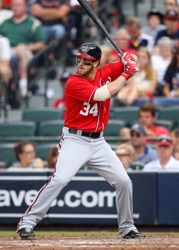 Most 19 years old are in college or the military and you are just finding out who you are. For Bryce Harper he is finding out he is a baseball superstar and the ceiling is nowhere to be found. None of Harper’s success is unexpected as he appeared on the cover of Sports Illustrated when he was in high school and was drafted number one overall at the age of 17. Bryce Harper was called up in May and excelled right away. Not only did he have power he had awe inspiring power hitting the restaurant in Toronto. A bit cocky, Bryce Harper can rub people the wrong way. However, when you have the God given talented he has who can blame him. Harper was one the reasons why the Nationals won the division. Along the way he was the first teenage All-Star since Dwight Gooden and became the first teen to hit more home runs than his age, finishing the season with 22. 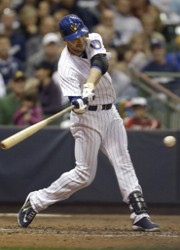 Whether or not his MVP season in 2011 is tainted by a positive test for Performance Enhancing Drugs is debatable. He was found not guilty on a technicality and remains innocent in the eyes of the law. One can only assume he was heavily scrutinized and any test he took had the up most care in looking if there was anything in his system. Still he led the National League in Home Runs with 41 and was among the league leaders in RBI. It’s hard to imagine he will get MVP consideration as the Brewers struggled all season. However, the Hank Aaron Award should find its way into Braun’s trophy case. 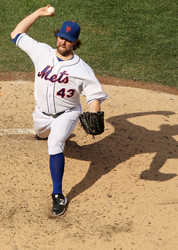 The year started at the summit of Mount Kilimanjaro for R.A. Dickey and went even higher. When Dickey started season he was the last of the knuckleballers. He also released an autobiography detailing abuse as a child and his struggle to make the majors as he languished in the minors for a decade. For most of the first half of the season, Dickey was unhittable as he pitched back-to-back one hitters in the second half. At the same time he had a streak of 44.1 innings without allowing an earned run to score. While inspirational stories like this make good sports movies, which you know some day will be made about R.A. Dickey after this season, but they are not reasons for winning the Cy Young. The reason Dickey should win the Cy Young are that he was first or second in all the major pitching categories in the National League. He was the first 20 game winner on a losing team since Roger Clemens in 1998. He led the NL in innings, complete game and shutouts. Dickey led the lead in strikeouts with 230, with just 54 walks amazingly low for a knuckle ball pitcher, and he did it all while pitching with a torn abdominal muscle. 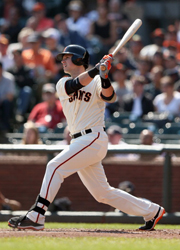 The definition of MVP is the player that is most valuable to his team. For the San Francisco Giants that player without doubt is Buster Posey. Want further evidence just think back two years as he was the catalyst of their run to the World Series as a rookie, and than think back to last year when the team fizzled after Posey suffered a season ending leg injury in May. This year Buster Posey not only came back to the Giants he came back stronger and the Giants are poised for another playoff run, winning the NL West with room to spare. Along the way Buster Posey became the first catcher in the National League to win the batting title in 70 years, with an average of .336. He also showed effect of the collision that ended his 2011 season remaining one of the best defensive catchers in the NL, while hitting 24 homers with 103 RBI. He also had a solid .957 OPS, which ranked second in the National League and fourth overall in baseball. 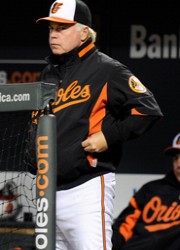 There should almost be a split vote for the Manager of the Year in the American League, as both Bob Melvin of the Oakland Athletics and Buck Showalter of the Orioles deserve for the job they have done. The A’s overcame a 13 game deficit and won the AL West on the last day of the season with a bunch of rookie starting pitchers. The Orioles overcame apathy and a 15 year stretch of losing seasons to win the Wild Card. It is why Showalter gets my vote as he needed to change a losing atmosphere and he did it without changing many players as the O’s were resilient and had a remarkable ability to win one run games in extra innings. It is those games where a manager matters most and Showalter is one of the best at in game situations. 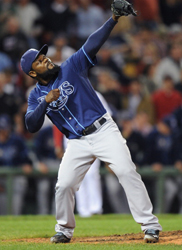 Given the closers job with the Angels in 2011, Fernando Rodney’s season got off to a disastrous start as blew a couple of saves in the first week of the season. He would lose his job and never get it back. By the end of the season Rodney would be buried in the Angels bullpen as had an ERA of 4.50 and made it known he wanted out of Anaheim. In Tampa Bay this season Romney not only redeemed himself he established himself as one of the best closers in the American League, as he was nearly automatic and unhittable, posting a microscopic ERA of 0.60, while saving 48 games with just two blown leaves as he only allowed nine runs in 74.2 innings pitched. 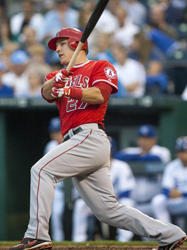 There is not much to say about the season Mike Trout had for the Angels as his call up helped revitalize a team that had gotten off to a bad start. His arrival also helped take weight off the shoulders of Albert Pujols, who had gotten his big contract off to a bad start in Anaheim. Trout was the perfect five tool start right away, as he played dazzling defense, blazed the bases, hit the ball everywhere, and supplied plenty of power. Trout who will get some MVP consideration had a Rookie season for the ages, becoming the youngest player at the age of 31 to have a 30-30 season, hitting 30 home runs, while leading the American League with 49 steals. In addition Mike Trout .963 OPS was the third best in baseball, while his 129 runs led all of baseball. In addition he came just .004 of winning the AL Batting crown at .326. 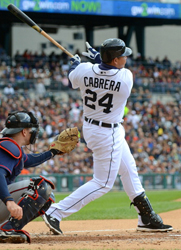 Though Hank Aaron never won a triple crown, Miguel Cabrera’s excellence is the perfect tribute to the player who gets the annual award voted by fans and the media for the best hitter. Previously Miguel Cabrera was one of the most feared players in baseball, since the time of his call up as a 20 year old in 2003. By winning the Triple Crown, Cabrera now joins a list of legends that are among the best hitters of all-time. Amazingly his average of .330 this season was not as good as last year, but .330 is outstanding nonetheless, especially when you add 44 home runs and 139 RBI. 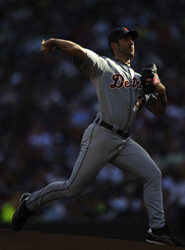 Coming off a season in which he won the Cy Young Award and MVP, Justin Verlander had a hard act to follow up on. Justin Verlander came nowhere near matching his historic 2011 season, but he remained one of the best pitchers in all of baseball. The race for the American League Cy Young is wide open, as Fernando Rodney and 20 game winner David Price from the Rays should get heavy consideration, as should Jered Weaver of the Angels. However, Verlander like a horse coming out of the back of the pack takes the Cy Young for a second straight year by a nose, as he posted a 4-0 record with a 0.64 ERA and 27 strikeouts over the last three weeks make the difference. Verlander’s September was a big part of the Tigers winning the Central Division as Justin Verlander finished the season with a solid 1706 record, and an ERA 2.64 are among the league’s best. Meanwhile he led the league in WHIP at 1.02 and strikeouts with 239. 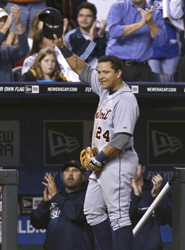 The Triple Crown it is as magical as it sounds, and as rare as only 13 players have led the league in average, home runs and RBI in the same season since 1900 before this year. It also appeared as if it was something that was a part of baseball’s past as nobody had done it since 1967. That legendary throne room now has one more member, Miguel Cabrera of the Tigers. Everyone who has had a triple crown season is a member of the baseball Hall of Fame, the list includes names like Cobb, Hornsby, Gehrig, Williams, Mantle, Robinson and Yaz. Though some may have been overlooked in the past for the MVP to not give Miguel Cabrera the MVP this year would be a miscarriage of justice. Mike Trout has a great season, but the Triple Crown can not be topped. Besides leading the league in Home Runs with 44, RBI with 139 and hitting .330, Miguel Cabrera had incredible OPS of .999. How can this be topped? In addition his September surge for history also helped lift the Tigers to the American League Central Crown. Every definition of MVP is what Miguel Cabrera is.

These are not just mere prediction but whom I believe should win the said awards. Slected by Frank Fleming on October 4, 2012 at 11:10 pm ET