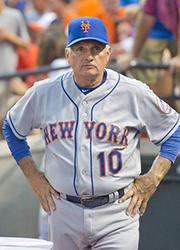 The Mets are the big surprise in the National League East, winning the division championship after six straight losing seasons. The Mets did have a great foundation with a young pitching staff led by the return of Matt Harvey. However, after a strong start the Mets went through a stormy stretch where most of the lineup was injured, while minor leaguers filled in poorly. Somehow they stayed afloat got healthy made big acquisitions at the deadline and won the NL East as Terry Collins perfectly meshed the newcomers with the old. 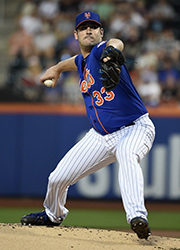 After missing the entire 2014 season following Tommy John surgery, Matt Harvey did not take long to find his groove and once again became one of the best pitchers in the National League. Harvey, remained healthy all season and even topped the hard 180 innings limit that was set at the start of the season. While his numbers were not gaudy he lacked run support most of the season and ended up posting a solid 13-8 record with an ERA of 2.79, while striking out 188 batters in 29 starts. 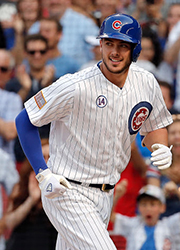 When the season began the biggest controversy on the North Side of Chicago was that Kris Bryant began the season in Iowa. He was the Cubs number one prospect and had a monster spring training. Billboards advertising his arrival arose in Wrigleyville and soon enough he was on his way. Once arriving in Chicago, Kris Bryant became the most dangerous hitter in the Cubs lineup with 26 homers and 99 RBI. Bryant also had several clutch hits and was a big part of them winning 97 games and a Wild Card spot. 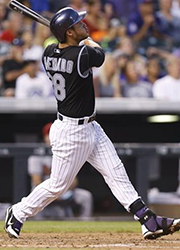 In a season in which the Rockies wallowed in the basement of National League West, one player always gave fans a reason to cheer. Whether it was his gold glove play at third base or his killer swing, Nolan Arenado was one of the best overall players in baseball, though few noticed with his team out of the race before Mother’s Day. While his numbers could be slightly inflated at Coors Field, Arenado led the majors with 130 RBI, while he shared the National League Home Run Crown with Bryce Harper with 42. 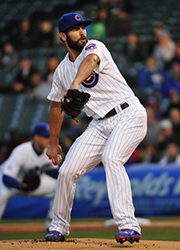 If there was ever a year to split the Cy Young Award down the middle it would be this season in the National League. Zack Greinke of the Dodgers was the best pitcher from the start of the season, and led the Majors in ERA at 1.66, while posting a 19-3 record. However, what Jake Arrieta has done is inhuman. Arreita finished second in ERA at 1.77 and third in strike outs with 236, while leading the majors with 22 wins. What makes Arrieta’s season even more impressive is the best second half ever with a 0.40 ERA since August 1st. 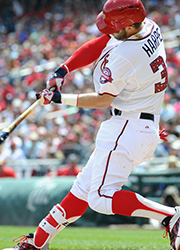 While the Washington Nationals were a huge disappointment, failing to make the playoffs after being a heavy favorite to win the World Series; Bryce Harper had the breakout season everyone was waiting for. Harper was not the reason for Washington’s failures as he was among the leader in home runs and batting average all season. When the season was over Bryce Harper finished tied with Nolan Arenado for the NL lead in homers with 42, while his .330 average was .003 points behind Dee Gordon. His 99 RBI were ranked fifth, and would have been higher if his teammates did their part. 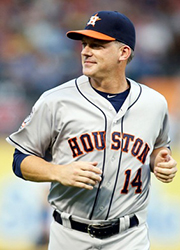 The Astros who only a few short year ago lost 100 games three straight seasons. Such consistent losing led to them stockpiling top level prospects like Carlos Correa. While most expected the Astros to improve this season, nobody could have seen them spending most of the season in first place in the American League. While a September slump may have cost the Astros a division title, they held on to claim the second Wild Card spot and made it to the postseason for the first time in a decade. Helping guide this young team was first year Manager A.J. Hinch. 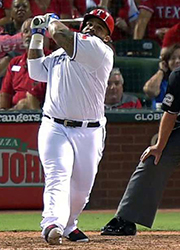 Nobody illustrated the Texas Rangers failures in 2014 more than Prince Fielder as he missed most of the season after neck surgery while the Rangers finished with the worst record in the American League. This year nobody illustrates the Rangers rebound better than Prince Fielder as he found his swing late in the season and played an integral role in their division championship. Prince Fielder ranked in the top ten in the American League in hitting at .305 with 23 homers and 98 RBI, with several key hits in their September drive. 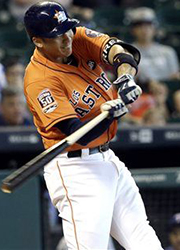 Carlos Correa is barely 21 and is already one of the best young players in baseball. Selected with the first overall pick in the 2012 MLB Draft, Correa had a meteoric rise through the Astros system excelling at every level with a skill years ahead of his age. Making his big league debut on June 8th, Carlos Correa was an instant splash in Houston setting several franchise records, including 12 home runs in his first 46 games as he was named Rookie of the Month in June. Correa finished his rookie season with 22 homers and 68 RBI in 99 games. 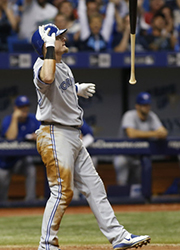 Just how good was the Toronto Blue Jays’ offense in 2015? Their 891 were not just the best in baseball, it was 127 more than the New York Yankees the second highest team in MLB. The leader of the pack was Josh Donaldson who led the Jays in home runs with 41 and 123 RBI. This in the middle of a lineup with three players with 39 or more home runs and 111 or more RBI. 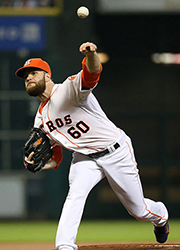 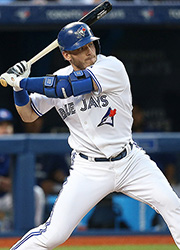 The Toronto Blue Jays had three key deals to win the American League East for the first time in 22 years. The two big deadline deals and the off-season trade that landed them Josh Donaldson from Oakland. The A’s made the playoffs the last three years but finished with the worst record in the American League, the Jays went from mediocre to an offensive juggernaut and the lynch pin was Donaldson, who led the American League with 123 RBI, while his 41 homers ranked third. His presence in the Jays lineup made everyone around him better as he had several big clutch hits.

These are not just mere prediction but whom I believe should win the said awards. Slected by Frank Fleming on October 4, 2015 at 10:30 pm ET