J.J Watt Will Retire At The End Of The Year

J.J. Watt has announced that he will play his final two games over the next two weeks. Ultimately ending one of the most respected and elite NFL careers. J.J Watt has played his past two seasons for the Arizona Cardinals, where he played at a high level but not nearly as dynamic as his years in Houston. He played college football at the University of Wisconsin and was drafted by the Houston Texans with the 11th overall pick in the 2011 NFL Draft.
Watt has established himself as one of the best defensive players in the league, earning a reputation for his dominant play and relentless work ethic. He has been named a First-Team All-Pro five times and has won the NFL Defensive Player of the Year award three times. In addition to his on-field accomplishments, Watt is also known for his charitable work and his commitment to giving back to the community.
Watt was born on March 22, 1989 in Waukesha, Wisconsin. He attended Pewaukee High School, where he played football, basketball, and track and field. As a junior, he was named the Woodland Conference Player of the Year in football after recording 12 sacks and leading his team to a conference championship.
After high school, Watt attended the University of Wisconsin, where he played college football for the Badgers. As a freshman, he played mostly on special teams and as a reserve defensive end. However, he quickly established himself as a key player on the defense, and by his junior year he was a starter. In his final season at Wisconsin, Watt earned first-team All-Big Ten honors and was named a consensus first-team All-American.
After his standout college career, Watt entered the 2011 NFL Draft and was selected by the Houston Texans with the 11th overall pick. The Houston fans were not fond of the pick, and letting everyone hear, but J.J in his introductory press conference said “there’s been disappointed people and that’s fine with me, I’ve been doubted before and I have confidence in myself as a football player.” J.J quickly quieted all the critics and made an immediate impact in his rookie season, recording 5.5 sacks and earning a spot on the NFL All-Rookie Team.
In his second season, Watt exploded onto the national scene, finishing the year with 20.5 sacks and earning his first of three NFL Defensive Player of the Year awards. He became just the second player in NFL history to record at least 20 sacks in a single season, and he was named a First-Team All-Pro for the first time in his career.
Over the next several seasons, Watt continued to dominate on the field, earning First-Team All-Pro honors in each of the next four seasons and winning the NFL Defensive Player of the Year award in 2014 and 2015. In 2016, he was limited by injuries and played in just three games, but he bounced back in 2017 to earn his fifth First-Team All-Pro selection.
In addition to his on-field success, Watt is also known for his charitable work and his commitment to giving back to the community. He has raised millions of dollars for various charities through events like his annual charity softball game and a social media campaign called the J.J. Watt Foundation. He has also been recognized for his philanthropy, winning the NFL’s Walter Payton Man of the Year award in 2017.
In the 2021 season, Watt signed with the Arizona Cardinals, where he continues to be a dominant force on the field and a leader in the community. With his combination of talent, work ethic, and philanthropy, J.J. Watt is one of the most respected and admired players in the NFL. J.J announced via Twitter early on Tuesday that this will be his last season, retiring at the age of 33. Interesting to note J.J announced both that he signed with the Arizona Cardinals in 2021 and his retirement via his own twitter acct. Which is very rare these days. J.J left a stamp on this game both on and off the field which will never be forgotten. 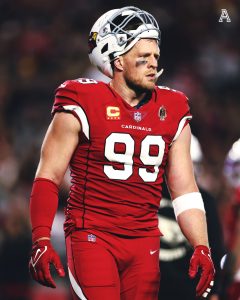