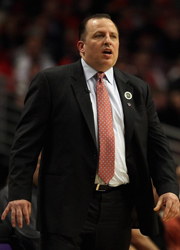 When the season began their were high hopes in Chicago, as the Bulls were expected to be a strong team on the rise, but nobody could have imagined them posting the best record in the NBA at 62-20. The Bulls did add some talent with Carlos Boozer, but other than Derrick Rose becoming one of the best players in the league they are the same team that went 41-41 last year. The difference seems to be Thibodeau’s defensive system that had the Bulls allow the fewest points in the NBA this season. 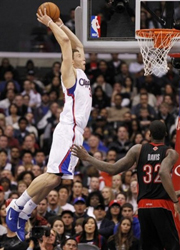 This may not technically be Blake Griffin’s rookie year as he was slated to make his debut last season, before a pre-season injury ended his season before it began. Griffin did not miss a beat upon returning as he showed no ill effect of the broken knee cap, by becoming a human highlight film with the Clippers. His dunk over a car during the All-Star weekend certified him as the new face of the league. His 22.4 ppg and 12.1 rpg was by far the best among rookies as he played in 81 of his teams 82 games. 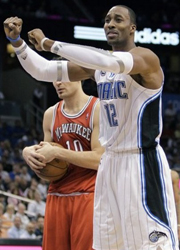 Some awards belong to a player until they lose it with an injury or age. The Defensive Player of the Year is quickly becoming that for Dwight Howard of the Magic. This will be his third straight year winning the award as he ranked among the best in rebounds and blocked shots again. Howard is without question the best center in the league and the age of 25 he is only going to get better. 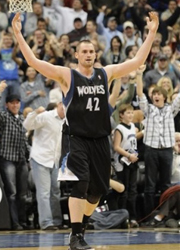 Kevin Love Timberwolves
The Timberwolves howled in pain again this year with the worst record in the NBA, but fans at least found a player they could get behind as Kevin Love in his third season became a force on the boards leading the NBA in rebounding at 15.2 rebounds per game. That was more than a point better than anyone else. Love’s season was highlighted by 53 straight games with a double-double the most since the ABA merger in 1976. 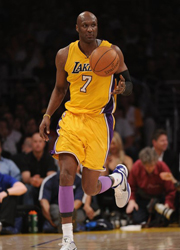 The Lakers as a team who has won two straight titles typically does went through their periods of malaise as the regular season appeared to bore them at times. Though one player who never slowed down was Lamar Odom, who had one of his best season’s ever as the Lakers first man off the bench averaging 32:12 minutes per game and 14.4 ppg his highest point output since 2007. 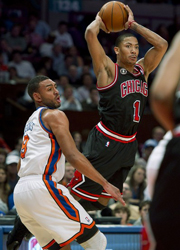 Derrick Rose selected by his hometown Chicago Bulls with the number one pick in 2008 has had in instant impact in the NBA winning the Rookie of the Year. In three years he has steadily improved and in his third year he arrived among the league’s elite as he led the Bulls to the best record in the NBA. Rose did not have the big stats that would make it among the league leaders in any of the big categories, but he was good across the board in points and assists as he became the big playmaker the Bulls have been waiting for since Michael Jordan retired the second time in 1998. While the Bulls success was a team effort for Rose becoming their leader at 22 he is the choice as league MVP.

©MMXI Tank Productions. These are not just mere prediction but whom I believe should win the said awards. Selected by Frank Fleming on April 14, 2011 at 11:25 pm EST