The Greatest Shooter Of All Time. That’s how everyone is describing legendary Golden State Warriors point guard Stephen Curry after he became the NBA’s all-time leader in made three-pointers. 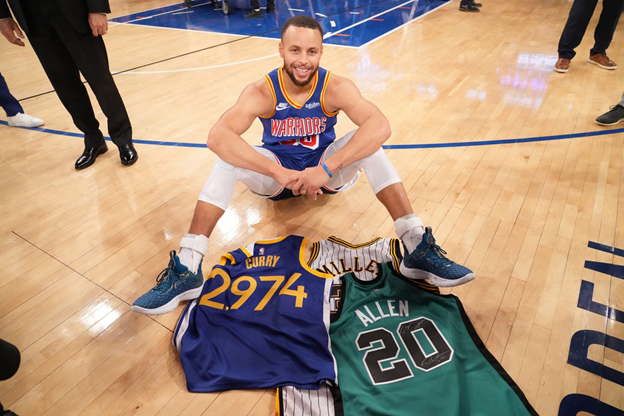 His feat was achieved on arguably the biggest stage of all on Dec. 14 when he scored his 2,974th career three-pointer against the New York Knicks in a 105-96 victory for the Warriors at Madison Square Garden. He hit a pair of first-quarter triples to move past Ray Allen and seize the top spot in the history books.

Curry’s historic tally came over the course of 789 games, which is 511 fewer games than it took Allen (exactly 1,300) to reach the milestone. Curry has said that after he broke the record, everything else would “just be about how far can you push it.”

Now it looks like he can push it pretty far.

In the three and a half games since that record-breaking hoop, at the time of writing this article, the 33-year old has netted a further 12 treys to take his tally up to 2,986. He moves ever closer to the magical 3,000-mark that no player in NBA history has ever reached.

And the chances of him reaching that milestone over the next few weeks look good, provided the NBA season isn’t hit by any effects of the Covid pandemic. League bosses are holding out hope that the Christmas Day clashes aren’t going to be affected.

Warriors are involved in probably the biggest game of the day if it does go ahead – a thrilling match-up of 1st v 2nd in the Western Conference when they head to Phoenix to take on the Suns.

The best two teams in the country have each won their home meeting so far this season but Curry is in unstoppable form and the Warriors are currently the best defense in the NBA – at +3.5 with the spread and +138 with the Moneyline they look a great bet for victory, with the Suns’ meanwhile -3.5 and -163.

You can check all the Warriors odds at betmgm sportsbook in Louisiana for that clash and also for the forthcoming fixtures – a double-header against the Denver Nuggets (Dec. 29 and Dec. 31) followed by Utah Jazz (away) on Jan. 2 and Miami Heat (home) on Jan. 4.

Once they get through the trip to the Suns, all of those following matchups are favourable and  Curry’s side are ranked high in the betting to keep their momentum going to deliver him the glorious 3,000.

That target is likely to come early in the New Year if he continues on his trajectory since the beginning of the 2021/22 campaign.

In the Warriors’ season-opener against the Lakers on October 19, Curry recorded his eighth career triple-double with 21 points, 10 rebounds, and 10 assists in a 121–114 win. Two days later he put up 45 points, with 25 of those coming from the first quarter on 9-of-9 shooting from the field including five three-pointers, and 10 rebounds in a 115–113 win over the Clippers.

It was in November when he really accelerated his record-breaking prospects. The month started with a 127-113 victory over Atlanta Hawks in which Curry amassed an incredible 50 points, including nine three-pointers. It was the first time he had ever posted 50 points and 10 assists in the same game, usurping Wilt Chamberlain as the oldest player in history to put up that single-game line.

He then became the NBA’s career leader for three-pointers in both regular season and playoffs – the match against Chicago Bulls bringing him up to 3,366. Fast-forward a month to a star-studded Madison Square Garden showdown with the Knicks and the history books were finally rewritten.

The record-setting bucket came at the 7:32 mark, and officials stopped the game so the packed house could acknowledge the achievement. Curry walked around the court hugging several team-mates, opponents and others and then sat down on the bench to share his big moment with Draymond Green. 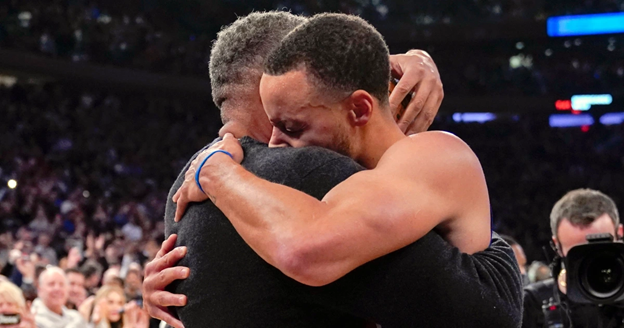 It was the perfect surroundings for the perfect occasion. Team coach Steve Kerr spoke of the event as something that transcends sports.

“He’s part showman and full-time fearless shot-taker and shot-maker. But it’s definitely a story that rings true to a lot of people who aren’t huge basketball fans. Steph appeals to everyone, not just hardcore fans who are looking at his three-point percentage.

“I think fans are attracted to him just because of his humility, his story and how hard he’s had to work. So, from that standpoint, it transcends sports somewhat.

“I just think it’s a great testament to someone who is gifted, but who has earned everything through work. Beyond the gifts that he was given, he had to work so hard. And he’s always been so gracious and aware of how many people helped him along the way. That’s one of my favourite things about him.”

That hard work is something Curry himself knows can push him even further beyond basketball greatness. He told Sports Illustrated: “You see how many guys are shooting, or the volume of threes that are getting taken in a game, the way that teams are being constructed to use the three ball as a weapon.

“But you got to put the work in. And hopefully I can stand alone, with the body of work, when it’s all said and done. But definitely understand that things have changed drastically, and I have a lot to do with that.”

Curry helped to power the Warriors to a championship in 2015, then a 73-win season the following year, making him a back-to-back MVP, the first unanimous MVP and the first ever to claim the crown on the strength of his long-distance shooting alone.

And his legacy has only strengthened ever since.