1982: The Raiders would start the season with two road wins, but their debut in Los Angeles was put on hold when the NFL Players embarked on a two-month strike. When the season resumed on November 22nd, the Raiders beat the San Diego Chargers 28-24 in a Monday Night at the historic Los Angeles Memorial Coliseum. After a loss to the Bengals in Cincinnati, the Raiders won their next two before a showdown with the cross-town Rams at the Coliseum. The Raiders would win the shootout 37-31 in a sold-out Coliseum that was the first Million Dollar Gate in NFL history. The Raiders would go on to get the top seed in the AFC Playoff Tournament with an 8-1 record, as running back, Marcus Allen won Offensive Rookie of the Year honors. In the first round the Raiders, quickly dispatch the Cleveland Browns by a score of 27-10. In the next round, the Raiders are plagued by turnovers in a stunning 17-14 loss to the New York Jets.

1983: Before the season, the Raiders added salt in the wound of the NFL by winning a $35 million antitrust suit against the NFL for blocking the move to Los Angeles. To sure up holes in the secondary, the Raiders acquire Cornerback Mike Haynes from the New England Patriots. With a balanced offense, the Raiders get off to a quick start winning their first four games before losing a 37-35 shootout to the Redskins in Washington, which was in many eyes the game of the season. The Raiders would go on to cruise to another AFC West title with a record of 12-4, despite two losses to the Seattle Seahawks. In the Divisional Playoffs at the Coliseum, the Raiders would maul the Pittsburgh Steelers 38-10. The win set up a rematch with Seahawks in Los Angeles with the AFC Championship Game on the line. The Raiders would jump out to a 20-0 halftime lead behind the running of Marcus Allen, as the Raiders beat the Seahawks 30-14 to earn a trip to the Super Bowl.

Super Bowl XVIII: In a rematch of a memorable early-season game, the Raiders faced the Washington Redskins in Tampa with the Lombardi Trophy on the line. The Raiders would get on the board first when Derrick Jensen blocked a punt for a touchdown early in the first quarter. Late in the second quarter, the score was 14-3 when the Raiders grabbed a stranglehold on the game as Jack Squirek intercepted and returned an attempted screen pass five yards for Touchdown. In their regular-season meeting in a similar situation, the Redskins scored on the same play this time Squirek and the Raiders were not fooled, taking a 21-3 halftime lead. The second half would be the Marcus Allen show, as the Raiders star running back took over scoring two Touchdowns in the third quarter, including a 75-yard touchdown run to seal the game on the quarter’s final play. Allen would go on to win the game’s MVP as the Raiders won the third Lombardi Trophy by a score of 38-9. As always, there was a gleam in the eye of Al Davis as he received the trophy from Commissioner Pete Rozelle, the man he beat in court.

1985: Led by Marcus Allen, who won both the Offensive Player of the Year and NFL MVP, the Raiders recapture the AFC West by winning their last six games to finish with a 12-4 record. However, in the Divisional Playoffs, the Raiders would have a rash of turnovers in a stunning 27-20 home loss to the New England Patriots.

1986: The Raiders would stumble out of the gate, losing their first three games, as running back Marcus Allen plays through injuries at the start of the season. The injuries would become controversial when Al Davis publicly stated Allen was faking the injuries. Amidst the billowing storm, the Raiders would turn their season around, winning eight of their next nine games. The season would go down in flames after a Marcus Allen fumble is returned all the way in an overtime loss to the Philadelphia Eagles at the Coliseum, further agitating the troubles between Davis and Allen. The loss would be the start of a season-ending four-game losing streak as the Raiders finished with a disappointing 8-8 record.

1987: The troubles between Marcus Allen and Al Davis only get more heated as the Raiders sign former Heisman Winner Bo Jackson. However, they would not have Jackson full time as he chose to split time between baseball with the Kansas City Royals and football with the Raiders. With baseball season wrapping up, Allen helped lead the Raiders to a 2-0 start before a Players strike led to the use of replacement players. Davis insisted Allen cross the line, and when he didn’t, the bad blood between the two got worse. After winning their first game, the Raiders scabs would lose their next two games. When the regulars returned, the losing streak continued. The losing streak would finally end with a Monday Night showdown in Seattle, where Bo Jackson ran over Brian Bozwroth and the Seahawks in a 37-14 win. However, it was just a minor reprieve as the Raiders lost their last three games and finished with a woeful 5-10 record. After the season Al Davis, unhappy with the passionless crowds in Los Angeles, began to make overtures that he wanted to move again. Meanwhile, Coach Tom Flores would resign after a successful nine-year tenure.

1988: Under new coach Mike Shanahan, the Raiders would play mediocre football all season finishing with a 7-9 record, as newly acquired Quarterback Jay Schroeder struggles with turnovers, and Marcus Allen is underutilized with second-half arrival of Bo Jackson. Following the season, Al Davis would flirt with a move back to Oakland, but agreed to stay in Los Angeles after renovations were made at the Coliseum.

1989: After winning their season opener 40-14 over the San Diego Chargers, at the Coliseum, the Raiders drop their next three games leading to the firing of Coach Mike Shanahan. Under new coach Art Shell the Raiders would play better football right away, winning four of Shell’s first five games. In becoming coach, Art Shell became the first black coach in the modern-day NFL. The Raiders needed a win in their final game to have a shot at a playoff spot. The Raiders season would end with a 34-17 loss to the Giants in New York, as the Raiders finished with an 8-8 record, as Marcus Allen only carries the ball 69 times.

1990: With Marcus Allen becoming a vital part of the offense again with 13 Touchdowns as the Raiders win 6 of their first seven games. The Raiders would go on to capture the AFC West with a 12-4 record as Allen, and Bo Jackson provides a potent 1-2 punch in the backfield. In the Divisional Playoffs, the Raiders would beat the Cincinnati Bengals 21-10 at the Coliseum. However, Running Back Bo Jackson would suffer a career-ending hip injury late in the 3rd Quarter when David Fulcher rips the hip out its socket in a tackle from behind on the sidelines. Playing without Bo in bone-chilling weather, the Raiders season is ended with a 51-3 rout at the hands of the Bills in the AFC Championship game in Buffalo.

1991: Al Davis further enflames the ire of Marcus Allen by signing Plan B Free agent Roger Craig, as Allen seems trapped on the Raiders being underused. The Raiders probably could have used Allen as they lost their last three games of the season. However, with a record of 9-7, the Raiders still managed to sneak into the playoffs. However, their season would end quickly with a 10-6 loss to the Chiefs in Kansas City in the Wild Card Game.

1992: Marcus Allen continues to be buried on the bench as the Raiders get off to a miserable start losing their first four games. The Raiders would not be able to overcome the beginning, never reaching the .500 mark while finishing with a 7-9 record, following the season Marcus Allen given the opportunity of actual free agency signed with Kansas City Chiefs, in an attempt at revenge against Al Davis, who orchestrated his prolonged benching.

1993: With newly acquired Quarterback Jeff Hosteller, the Raiders play solid football all season and qualify for the playoffs with a 10-6 record, along the way Raiders won several close games in the 4th quarter. One of those nail bitters was a season finale 33-30 overtime win over the Denver Broncos at the Coliseum, which decided home field for their Wild Card playoff match up. The Wild Card Game would not be as close as the Raiders cruised to an impressive 42-24 win. A week later, in the Divisional Playoff, the Raiders held the lead early in the fourth quarter over the Bills in Buffalo. However, the Bills would rally and pull out a 29-23 win to end the Raiders season.

1994: The Raiders would stumble out of the gate, losing three of their first four games. The Raiders would recover and entered the final game of the season in Los Angeles on a three-game winning streak, needing just a win over the Kansas City Chiefs to make the playoffs. However, the Raiders offense could not get it going in a 19-9 loss that ended their season with a 9-7 record. Following the season coach, Art Shell would be fired and replaced by Mike White. However, the big news of the off-season was a move. After 13 unsatisfying years in Los Angeles, the Raiders announced they were moving back to Oakland after the city agreed to a massive overhaul of the old Oakland Alameda County Coliseum.

Defensive Rookie of the Year:

Offensive Rookie of the Year: (1)

Defensive Player of the Year:

Offensive Player of the Year: (1) 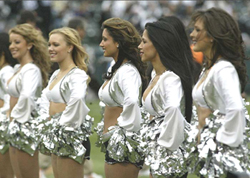 The Best Oakland Raiders of All Time

©MMXX Tank Productions. Stats researched by Frank Fleming, all information, and team names are property of the National Football League. This site is not affiliated with the Los Angeles Raiders or the NFL. This site is maintained for research purposes only. All logos used on this page were from Chris Creamer’s Sports Logos Page.
Page created on August 12, 2002. Last updated on August 19, 2020, at 11:40 pm ET.