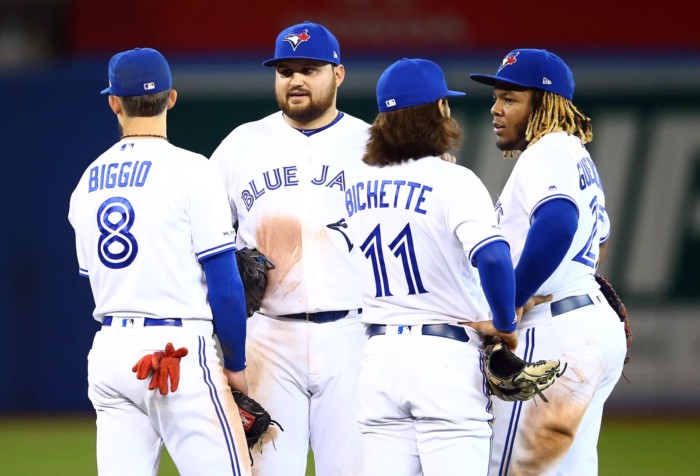 The Toronto Blue Jays have a lineup full of rookies that have the team looking forward to the future. Valdimir Guerrero Jr, Bo Bichette, Cavan Biggio, Lourdes Gurriel Jr., Danny Jansen and Trent Thornton all have the front office and fans salivating with dreams of things to come. Whether it be in the field, on the mound, or at the plate, the young birds have the weight of the franchise on their collective shoulders. The Blue Jays have made only two post season appearances in the last 26 years and will more than likely post the franchise’s worst win/loss percentage since 1978.

If you also add in Teoscar Hernadez (playing his second full MLB season) and Derek Fisher who alongside his fellow outfielder is just 26 years old, the Blue Jays have a roster that could be primed for success in a few years. However, just because your team is filled with talent, doesn’t necessarily equal guaranteed success. The question now is, where does the next wave of talent fit in? Do the Blue Jays continue to add younger players to their roster with the hope that eventually they will all mesh together or do they trade some of their youth for experienced players who can help the team through the grind? Will the Jays ever find themselves in the position of being championship contenders while all their young talent is happy to be in Toronto or will they have lose their young studs to teams with bigger bank accounts and title aspirations.

According to Baseball America, the Blue Jays farm team ranks among the top ten in the MLB. Of the Jays top ten prospects, six are pitchers, a position in which Toronto is in desperate need of an upgrade. Two pieces that look to have a lock on the Jays roster for the 2020 season are Nate Pearson, Alek Manoah and Anthony Kay, a pair of right handed pitchers and a southpaw who will add to the starting rotation. The other four prospects are a pair of players who play shortstop, a third baseman and a catcher. Unless GM Ross Atkins plans on moving Guerrero Jr. over to first, those four youngsters may be more valuable as trade chips rather than roster members.

Http://canadiansportsbetting.ca/blue-jays/stream-and-watch-jays-games-online/ provides a great list of alternative viewing source for those who might not be able to catch the game at Roger Centre or at home on cable. While the Blue Jays are more often than not the underdog in each series as the season comes to a close and the team is 4-6 in the last ten games, fans still have an invested interest in the future of this team.

With the fourth worst record in the American League and sixth worst in all of Major League Baseball and only twelve games left in the season, the only series in which the Blue Jays are potential favorites are their home and home series with the Baltimore Orioles. Look for Toronto to find a way to sweep all six games against the second worst team in the MLB and pull out an upset victory in each of their series against the New York Yankees (who are +375 favorites to win the World Series) and Tampa Bay Rays (+2500), two teams battling for a spot, unlike the Jays, in the 2019 post season.