1976/77: In one offseason, the Toronto Toros went from the hotbed of hockey to the heart of Dixie as they became the Birmingham Bulls after being unable to secure a new lease with at the Maple Leaf Gardens. The World Hockey Association, in its fifth year, hoped the find new markets to spread their league, but I doubt they ever had Alabama in mind. In their first game at the Birmingham Jefferson Convention Center, the Bulls coached by Gilles Leger defeated the Houston Aeros, one of the premier teams in the WHA led by Gordie Howe 4-2 on October 8th. However, for the most part, wins were few and far between for the Bulls who held a 5-16-1 record through their first six weeks. In the second half of the season, the Bulls would play better, but they would still finish in fifth place with a record of 31-46-4. Among the bright spots was Mark Napier, who led the team in scoring with 60 goals and 36 assists, while Goalie John Garrett was an all-star thanks in part to four shut outs. Best of all, the Bulls were one of the better drawing teams, as fans in Birmingham were drawn to the curiosity of professional hockey.

1977/78: In their second season the Bulls looked to build off their improved play in the second half and get back to the playoffs as they hoped a competitive team would build on the curiosity factor and make fans in the Deep South learn to love hockey as much as they did in Canada. Another thing driving this need to build a fan base was the sense that the WHA was in its final years, as teams were looking to join the NHL. The Bulls would be a longshot to make the cut in the merger of the two leagues, but if they could be successful on the ice and have full arenas, they could at least make their case. Once again, the Bulls began the season with a win over the Houston Aeros. However, they would drop their next eight games for new Coach Glen Sonmor. December would be a good month for the Bulls, who won 12 of 17 games, including wins over international teams from the Soviet Union and Czechoslovakia, which the WHA now down to just eight teams counted in the league standings. The Bulls would also finish the season strong with a 7-3-1 record in their last 11 games, as they posted a record of 36-41-3 to finish in sixth place, two points in front of the Cincinnati Stingers for the final playoff spot in the WHA. Leading the way on the ice was Ken Linesman, who led the team in scoring with 38 goals and 38 assists, while John Garrett again was the team’s top scorer. In the playoffs, the Bulls would be overmatched by the Winnipeg Jets, who advanced to the WHA Finals by winning the series in five games. The Jets would go on to win the AVCO Cup.

1978/79: It was clear that the WHA was on its last round up when the Bulls started their third season in Birmingham as the league was in negotiations to merge with the NHL. The Bulls were not one of the team’s included in the merger talks, but Owner John Bassett was hoping star power could give them a chance for survival, pursued a deal with 17-year-old junior star Wayne Gretzky. However, Gretzky signed with the Indianapolis Racers instead. The Racers would eventually send the Great One to the Edmonton Oilers before folding as the WHA had dwindled to six teams. In their last season, attendance would fall off as the novelty was wearing off for hockey in Dixie. New Goalie Pat Riggin struggled, with a 3.78 GAA, as the Bulls defense was the worst in the league. Leading the team in scoring was Rick Vaive, who scored 26 goals with 33 assists, while rookie Rob Ramage provided some spark, with 48 points. However, it was not enough as the Bulls finished in last place with a record of 32-42-6, just two points behind the Cincinnati Stingers for the final spot in the playoffs. Despite the poor finish, John Brophy was named Coach of the Year. The Bulls, along with the Stingers would be paid to fold, though the Birmingham Bulls name stayed alive for a few more seasons as a minor league team in the Central Hockey League. The NHL has never considered placing a team in Birmingham, a city that has only seen brief stays major professional teams in upstart leagues.


Renamed Bulls from Toros after move to Alabama.

WHA Rookie of the Year:

WHA Defenseman of the Year:

WHA Goalie of the Year: 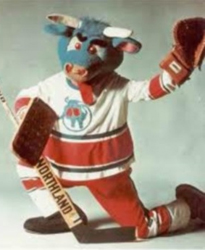 ©MMXX Tank Productions. Stats researched by Frank Fleming, all information, and team names are property of the World Hockey Association. This site is not affiliated with the Birmingham Bulls or the WHA. This site is maintained for research purposes only. All logos used on this page were from Chris Creamer’s Sports Logos Page.
Page created on July 7, 2013. Last updated on April 10, 2020, at 2:40 am ET.